Bourbon Red turkeys are noted for – yes, you guessed it – their beautiful red plumage. The “Bourbon” comes from their origin in Bourbon County, Kentucky, where they were first bred in the 1800s. They’re also known for a delicious, full flavor and are considered one of the best-tasting heritage turkey breeds

The Bourbon Red turkey is named for Bourbon County in Kentucky’s Bluegrass region where it originated in the late 1800’s. It was developed by J. F. Barbee from crosses between Buff, Bronze, and White Holland turkeys though the initial steps actually took place in Pennsylvania, where Buff turkeys of darker red hues – called Tuscarora or Tuscawara – were bred and then taken west with settlers bound for Ohio and Kentucky. These dark Buff turkeys would be the primary foundation for the new variety.
After some years of selection, Mr. Barbee was able to produce consistently good-sized dark red turkeys with white wing and main tail feathers. He christened these “Bourbon Butternuts.” For some reason, perhaps because the name did not appeal to the public, the birds did not attract attention. Barbee rechristened them “Bourbon Reds,” Bourbon for his home county and red for the rich, chestnut color of the plumage. The name change seemed to work, and better sales were reported.

The Bourbon Red variety was recognized by the American Poultry Association in 1909. It was ambitiously selected and promoted for utility traits, including a production-type conformation with a heavy breast and richly flavored meat. Early breeders of the Bourbon Red also claimed that their birds would grow as large as any Mammoth Bronze, a precursor to the Broad Breasted Bronze. The Bourbon Red was an important commercial variety through the 1930s and 1940s. As time went on, however, it declined in popularity as it was unable to compete with the broad breasted varieties. Since 2002, renewed interest in the biological fitness, survivability, and superior flavor of the Bourbon Red has captured consumer interest and created a growing market niche.

Bourbon Red turkeys are handsome. They have brownish to dark red plumage with white flight and tail feathers. Tail feathers have soft red bars crossing them near the end. Body feathers on the toms may be edged in black. Neck and breast feathers are chestnut mahogany, and the undercolor feathers are light buff to almost white. The Bourbon Red’s beak is light horn at the tip and dark at the base. The throat wattle is red, changeable to bluish white, the beard is black, and shanks and toes are pink. Standard weights for Bourbon Reds are 23 pounds for young toms and 14 pounds for young hens. Since, however, the Bourbon Red has not been selected for production attributes, including weight gain, for years, many birds may be smaller than the standard. Careful selection for good health, ability to mate naturally, and production attributes will return this variety to its former stature. 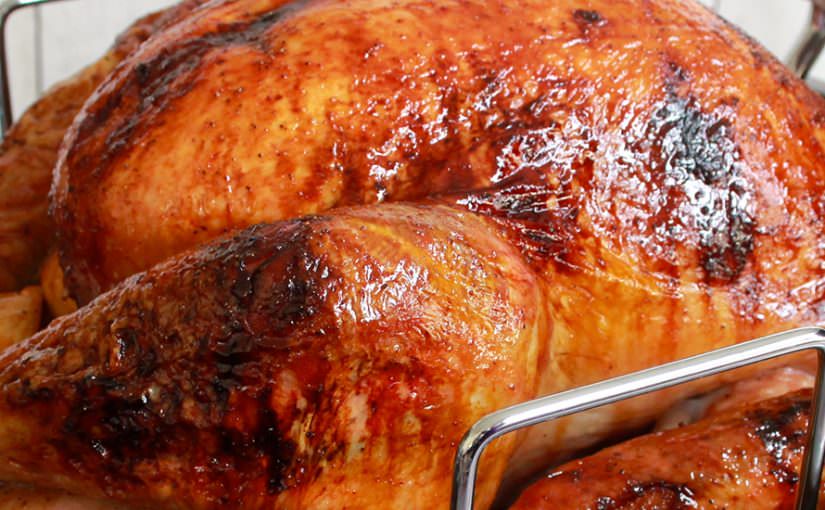 The Bourbon Red is an attractive bird for either exhibition or just for the backyard. They are active foragers, and would probably do well in a pasture production system, either as purebreds or when crossed with white turkeys. They also present an attractive carcass when dressed, since the light pinfeathers leave no residue of dark pigment showing the feather follicles as with the Bronze. Unfortunately we have no recent information on growth rate, feed conversion or egg production for any of the rare varieties. Documentation of performance information is urgently needed so that this variety can be promoted for use in sustainable agriculture as well as for backyard breeders.

If you would like to order our beef, chicken or turkey please feel free to contact us. We will be glad to give you the more details on any of our products including the health benefits.